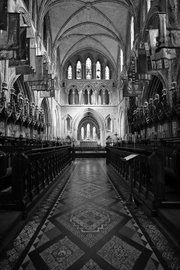 Saint Patrick's Cathedral in Dublin
Built over four other churches on Saint Patrick's Day, 1192. Saint Patrick's Well Stone, a stone slab that covered the well in which St. Patrick baptized innumerable converts since the 9th century, was discovered in 1901 and is now on display here.

Croagh Patrick
Also known as "Saint Patrick's Mountain", the rocky summit is where Saint Patrick lived in solitude for over 40 days of lent in 441 AD. It is also where he "banished all the snakes" from Ireland.

Tobair Padraig, or Patrick's Well
This is where they say Saint Patrick baptized his first Irish converts. Although the structure there now wasn't actually there in Saint Patrick's lifetime, this landmark is over 500 years old. Especially memorable is the statue of Saint Patrick, with a shamrock in his right hand held up to the heavens.

Lough Derg, Saint Patrick's Purgatory
This island in County Donegal, is where legend says Saint Patrick killed a horrific lake monster. The monster's blood turned the water red. People also believe Saint Patrick stayed in a cave here and, as at Croagh Patrick, struggled with visions of hell and many temptations. Since people believe the water is a cure for the seven deadly sins, numerous people make three-day pilgrimages here every year to benefit from its power.

Return to the TOP of Saint Patrick Landmarks

SacredSites.com
Very useful map of sacred sites in Ireland, including those that are related to St. Patrick.

Saint Patrick: Patron Saint of Ireland
Introduction to and list of all the articles about Saint Patrick on Fantasy-Ireland.com.