Soon after William Penrose's death in 1796, the company was sold. But Gatchell remained as one of the new partners. Fourteen years later, Gatchell was the head of the company.

Unfortunately, just as Gatchell took over, Ireland was hit with a new tax act, which imposed heavy excise duties and became a tremendous burden on the entire Irish glass industry. Nevertheless, Gatchell's persistence and leadership helped the company survive and even thrive until his death.

The company was under Gatchell control once again twelve years later, when Jonathan Gatchell's son took over the helm. For sixteen years, the young Gatchell managed to keep his father's company alive as well.

But the "Age of Irish Glass" was rapidly coming to an end. Since 1780, it had grown and flourished. But between 1825 and 1852, eight out of eleven of the glasshouses in Ireland financially collapsed. Although the heavy excise tax on glass was lifted in 1845, the damage to Waterford Glassworks was irreversible. Gatchell and Waterford held on to the end, but in 1851 he had no choice but to put the company up for sale.

From the Penrose brothers, to John Hill, to Jonathan Gatchell and then his son...the chain linking Waterford crystal back to the Penrose's lasted for sixty-eight years despite seemingly insurmountable odds. The story of Waterford Crystal is a fitting metaphor for the story of Ireland itself.

Thanks to the worldwide reputation Waterford crystal had earned, the company was revived in 1947 with a new factory built less than twelve miles from the one built by the Penrose brothers more than a century-and-a-half earlier. Today, the main Waterford crystal factory is on a forty-acre site and employs thousands. The company has two other plants in County Waterford as well. 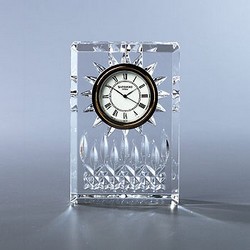 By far the most popular pattern is the classic Lismore, introduced over fifty years ago. Waterford has sold more Lismore pieces than any other design.

Although visiting Waterford City, Ireland and touring the factory is wonderful, I don't really recommend buying your Waterford crystal there. Why? Because although you may hear that prices are less when you buy direct from the factory, that isn't the case with Waterford crystal.

In addition, fine purchases this delicate should be professionally packed, shipped, and insured. If you buy in Ireland, make sure to have it shipped to your home rather than bring it home yourself. Or, better yet, rather than buying it as a tourist... buy it online from a distinguished merchant who is part of the Waterford Wedgewood Company, like Cashs of Ireland.

If you would prefer your Waterdord Crystal shipment to arrive faster, consider ShopIrish.com - The Premier web site for Irish Gifts

. Some of their pieces are featured on this page as well as Cash's, but they ship Waterford Crystal from within the United States. To see more Waterford Crystal items from these merchants, read Traditional Irish Wedding Gifts

John Hill's secrets to making exquisite crystal live on all these years later. The classic designs, the flawless elegance, the superior craftsmanship, the proud history...

Each and every piece is a priceless Irish treasure.

Click here to return to the TOP of this page